The ultimate potential digital technology can bring to people visiting historic sites is context — that it deepens the experience of being in the space.

Even the most relevant and informative digital interventions can shift attention from the act of experiencing a historic site. A great value of visiting a historic site is its ability to help a visitor feel as though they have stepped into another time. Augmented reality (AR) may help future visitors achieve a pleasant balance of historic and digital. Unlike virtual reality, in which a device (usually goggles) immerses the user in a world that is all they can see, augmented reality is a technological approach that adds a context layer over the user’s current field of vision.

Using the Wikipedia definition, augmented reality is “a live direct or indirect view of a physical, real-world environment whose elements are augmented (or supplemented) by computer-generated sensory input such as sound, video, graphics or GPS data.” The term was first used in 1990 with functional prototypes developed soon after. AR’s first use in a cultural heritage setting was was Archeoguide in 2005. The system required The equipment made up by a Head Mounted Display, a laptop, and a wireless router. Today, a similar experience can be replicated with one of the smartphone apps that began to appear in 2010.

This technology is evolving to function as the “ultimate label text.” Museum visitors will be able to point their mobile device (or tech-enabled glasses) at what they want to know more about. It will be an asset that can be called up when needed but does not need to be always on or actively navigated, like a tour app.

The most effective implementations of the technology for cultural heritage settings today typically take one of the following approaches:

Streetmuseum was one of the first history-related augmented reality apps for iOS. Its last update was in 2014 and the app is not in active development, though it is still available on the app store. The app allows users to select a destination from a London map or use geo-tagging and Google Maps to discover their location. Once selected, a historical image of their London location appears on the screen, which can be expanded and explored in detail, along with historical information about the subject. The historical image can be overlaid onto the current view of a given site.

This downloadable app by the National Museum of Natural History was developed to be used by visitors to the Bone Hall, an exhibit of nearly 300 vertebrate skeletons that was first opened in 1881. The app highlights 13 skeletons, including one of a swordfish, and shows 3D animations of the animals and how they look and move with their muscles and skin.

Though a highly impressive visual experience, the app is very limited in its useful time, even at the site. 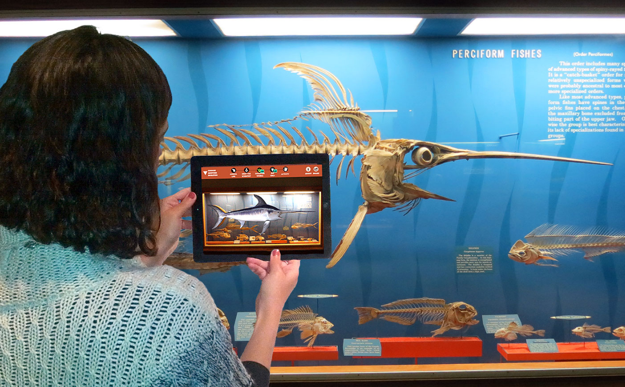 Transparent image displays feature a clear panel that can overlay imagery that can be watched (like moving label text) or interacted with like a multi-touch screen. It can house an object, or be placed in a room as a freestanding panel. Cost of the Hypebox interactive (shown left) is approximately $9,700 for the equipment. An additional budget would be required for custom development of graphics. The Perceptoscope updates the classic concept of stationary binoculars seen traditionally used at landmarks, museums and scenic roadside vistas. But the Perceptoscope is a device that fixes the augmented reality experience to a single location. Such a device could be stationed overlooking a historic site’s gardens. Visitors looking through the eye pieces could rotate the device and see historic photos or interpretive information overlaid on the landscape from a similar perspective, perhaps with the ability to scroll through a timeline of imagery, beginning with construction all the way through a historic site’s evolution. It uses 3D vision and motion tracking. This product is newly developed through a Knight Prototype Fund Grant and is currently looking for implementation partners among museums and historic sites. It was created by Ben Sax, who says “The idea is that there’s a lot of stories and hidden histories to every place you’re in, so how could we create a tool to let you expose those things … I see this as a tool for historic sites, museums, parks.” This technology has several advantages:

Augmented reality only achieved mainstream use in summer 2016 with the release of Pokémon Go. The impact of museums and historic sites has been mixed. As popular “Pokéstops,” where gamers catch characters and gain points, these sites do see more (and younger) visitors, often in groups. Frequently these new crowds miss interpretive opportunities entirely, and sometimes damage the site by lack of awareness or deliberate acts of vandalism. 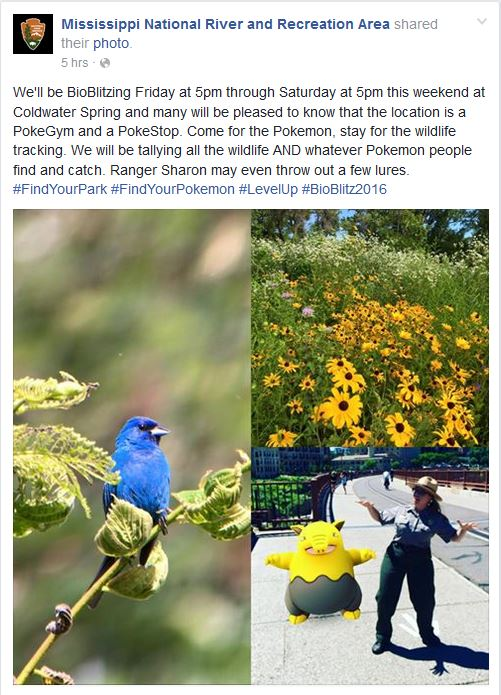 Museums are actively trying to capture the attention of Pokémon Go users, and several tactics are emerging from this effort that could be replicated.

Layar is one of the earliest augmented reality apps still in active development. From the user’s geographical position, the various forms of data are laid over the camera view like inserting an additional layer. Data in the browser comes in the form of layers.

The National Museum of Australia successfully used Layar in its “Garden of Australian Dreams” digital exhibition. More than 100 collaborators produced 700+ images, texts and sounds for the exhibition within two weeks. The project began with a visit the Garden of Australian dreams to find five symbols or locations that had personal significance or resonance. The points were photographed and uploaded to a website database, and the GPS location was marked on a Google map. The way-points were then visible on database, and would pop-up in the Layar browser when users were close to the GPS coordinates in the garden.

The next stage was to create a personal journey through five chosen waypoints, using text, image and sound. Visitors to the space could then use the Layar browser to follow an individual journey through the garden, or view the range of responses to a particular symbol or place, such as the Chinese character for “home”, or a town like Wagga Wagga, New South Wales.

Other institutions that have created layers in this platform include the Andy Warhol Museum and the Powerhouse Museum.

Voices of the Past Videos