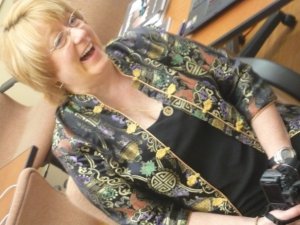 Last week, power blogger Lorelle VanFossen came to the National Park Service office where I intern and taught a workshop on the art of blogging and its uses in the heritage field. Lorelle stood in front of us and asked, “what do you say when someone says they have a blog?” Without missing a beat, one participant responded, “ask if there is a cure.”

That sudden burst of laughter broke the ice as we all discussed our thoughts on how blogging could potentially help the organization. Some responded with, “I don’t know; I am here to learn the answer” or “Because my boss told me to.”

But then we started discussing how blogging could help us reach a wider audience.

If you want to have a discussion on true Cajun cooking, you don’t go to Massachusetts or Texas. You go “down south” to southern Louisiana. If you want to converse with a younger audience and share your heritage values, you go online. That is where the people are. That is why we learned with Lorelle for a day and a half.

We still need and want to converse with folks already in preservation, but right now that is an older audience. What happens in another decade or so when the tools that the audience uses to communicate are obsolete?

Preservation is as much about preserving the memories of today as those of yesterday.That is what we learned to do. Instead of just jumping into the “work” aspect of blogging, we received the opportunity to begin our own blogs. Everyone was asked to find something he/she was passionate about. Something worth blogging.

We then began the “creation” part of our blogs.

We worked on finding a focus and creating a goal. Lorelle challenged us all to think about whom we were talking to. Who did we want to read our blog? And why were we writing? That was my favorite part. I enjoyed looking around the room and seeing the participants’ eyes twinkle with passion as they created their lists of tags and categories as they rediscovered their passions.

It was apparent during the outlining stage that I was in a room of established professionals. They had some of the most beautiful lists I had ever seen. But what was more fascinating were the subjects they chose to discuss.

Some found the new Apple technologies fascinating while other looked toward the dead and wanted to discuss graveyards and tombstones. One looked beyond the grave and deeper in the past to letters from a family who lived decades ago.

Lorelle reminded us that there are a hundred and ten different ways to show our passions. Some might be pioneering new land with an innovative idea. But most will broach subjects that have been discussed before, and it is our job to ensure that we cover them in a new way.

Lorelle’s lessons lingered on throughout the workshop. She provided opportunities for everyone to practice various blogging techniques and tools including video and podcasts.

She left mark on everyone by the time the workshop had concluded.

We all reflected about what we learned throughout the workshop. Our thoughts truly reflected the wide array of personalities in the group. Some found the power in block quotes and the value in writing out the plethora of thoughts and ideas in a blog format. Some were intrigued by the possibilities available with speed blogging and one even found a friend in WordPress.tv (a site with videos on how to use various WordPress applications).

The group, as a whole, found its voice. It found the ability to ensure it is heard in today’s hectic world.

2 thoughts on “Two days with a power blogger: learning the art of expression, connection and influence”

Voices of the Past Videos